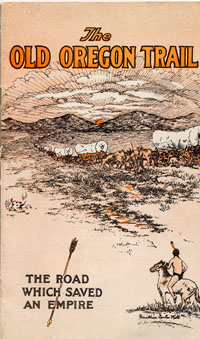 From the Journals of Lewis and Clark, April, 1805

Note: Lewis and Clark headed west on the Missouri River into what is now Montana, where no white man had gone before. "Our vessels consisted of six small canoes, and two large perogues. This little fleet, altho' not quite so rispectable as those of Coumbus or Capt. Cook, were still viewed by us with as much pleasure as those deservedly famed adventurers ever beheld theirs. . . .
We were now about to penetrate a country at least two thousand miles in width, on which the foot of civilized man had never trodden; the good or evil it had in store for us was for experiment yet to determine . . . [yet] entertaining as I do, the most confident hope of succeeding in a voyage which had formed a da[r]ling project of mine for the last ten years, I could but esteem this moment of my departure as among the most happy of my life."
"The buffaloe, Elk and Antelope are so gentle that we pass near them, while feeding, without appearing to excite any alarm among them; and when we attract their attention, they frequently approach us more nearly to discover what we are, and in some instances pursue us a considerable distance apparently with that view. I believe that two good hunters could conveniently supply a regiment with provisions."
From the Journals of Lewis and Clark, May, 1805
"If the single quill of cloud in the sky decided to come back to earth it would find no place to land. On both sides of the river buffalo, antelope, and elk crowd together, watching us work our way upstream. The water is black with beaver. We feast on the tail and the liver until I forget I have ever been hungry."
Camassia quamash

&#169Ellen Mast 2003
From the Journals of David Douglas
NOTE: Camas root was one of the most important food sources for native Americans. "A hole is scraped in the ground, in which are placed a number of flat stones on which the fire is placed and kept burning until sufficiently warm, when it is taken away. The cakes, which are formed by cutting or bruising the roots and then compressing into small bricks, are placed on the stones and covered with leaves, moss, or dry grass, with a layer of earth on the outside, and left until baked or roasted, which generally takes a night. They are moist when newly taken off the stones, and are hung up to dry. Then they are placed on shelves or boxes for winter use. When warm they taste much like a baked pear. It is not improbable that a very palatable beverage might be made from them. Lewis observes that when eaten in a large quantity they occasion bowel complaints. Assuredly they produce flatulence: when in the Indian hut I was almost blown out by strength of wind."
From the Journals of Lewis and Clark, June 12, 1806
"the days are now very warm and the Musquetors our old companions have become very troublesom...the quawmash is now in blume and from the colour of its bloom at a short distance it resembles lakes of fine clear water, so complete is this deseption that on first sight I could have swoarn it was water"
From the Journals of Lewis and Clark, August, 1805
NOTE: In search of the route west to the Pacific, Lewis and Clark found themselves led south by the Moussouri. Clark set off overland in search of horses, while Lewis, in command of the canoes, discovered that Sacagawea recognized familiar territory. "The Indian woman recognized the point of a high plain . . . which she informed us was not very distant from the summer retreat of her nation on a river beyond the mountains which runs to the west. This hill she says her nation calls the beaver's head from a conceived re[se]mblance of it's figure to the head of that animal. She assures us that we shall either find her people on this river or on the river immediately west of it's source; which from it's present size cannot be very distant. As it is now all important with us to meet with those people as soon as possible, I determined to proceed [ahead} tomorrow with a small party to the source of . . . this river and pass the mountains to the Columbia; and down that river until I f[i]nd the Indians. In short, it is my resolusion to find them, or some others who have horses, if it should cause me a trip of one month."
From the Journals of Lewis and Clark, August, 1805
NOTE:The Shoshone chief Cameahwait was Sacagawea's brother. Sacagawea helped convince the Shoshones to sell to the Corps of Discovery all the horses they needed.
"The moccasins of the whole party were taken off, and after much ceremony the smoking began. . . . Glad of an opportunity of being able to converse more intelligibly, Sacagawea was sent for; she came . . . sat down, and was beginning to interpret, when, in the person of Cameahwait, she recognized her brother. She instantly jumped up, and ran and embraced him, throwing over him her blanket, and weeping profusely."
From the Journals of Lewis and Clark, October 16, 1805
NOTE: On October 16, 1805, Lewis and Clark reached the Columbia. "This river is remarkably clear and crouded with salmon in maney places. . . . Salmon may be seen at the depth of 15 or 20 feet. . . . The number . . . . is incrediable to say"
From the Journals of Lewis and Clark, November 24, 1805
NOTE: Having reached the Pacific, the Corps of Discovery voted on where to spend the winter: they could remain on the north side of the Columbia, move south into what is now Oregon, or head back upriver. Notably, Clark's slave, York, was allowed to vote, as was Sacagawea, the Indian woman. They decided to cross the Columbia into Oregon. "Capt. Lewis Branded a tree with his name, Date etc. . . . The party all Cut the first letters of their names on different trees. . . . I marked my name, the Day & year on an alder tree. . . . William Clark. By Land from the U. States in 1804 & 1805."

Plants Identified by Lewis and Clark Along Their Journey

Meriweather Lewis and William Clark recorded detailed descriptions of many American plants new to botanical science. They also collected plants; many of these original specimens remain today in the Lewis and Clark Herbarium at the Academy of Natural Sciences in Philadelphia. Our knowledge of the natural history of the American west owes much to the expedition's painstaking documentation. Sources include : nationalgeographic.com , Plants of the Lewis & Clark Expedition, H. Wayne Phillips, Mountain Press Publishing Company, 2003, and Lewis and Clark an Illustrated History, Dayton Duncan, Alfred A. Knopf Publishing Company.