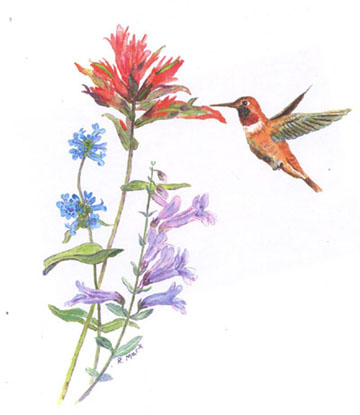 Brilliant blue flowers grow through unlikely crevices among hot, dry rock. A spring trip to the Columbia Gorge delights with a treasure trove of native Penstemons; against their basalt backdrop they appear as jewels in a harsh landscape. Leslie Haskin found inspiration here for her book Wildflowers of the Pacific Coast. “There [Penstemon rupicola] may be seen in all its beauty without the effort of a wearisome climb to the heights. There, also, it blooms in early spring, while its mountain sisters may not open their blossoms until the hot sun of late summer has thawed the alpine snowbanks and uncovered the mat-like plants.” These American wildflowers are a familiar sight for hikers in the Cascades, but they can also be found all over our state. Though most common in rocky alpine habitats, there are species adapted to many different conditions, including coastal forms that thrive in lowland areas of the Willamette Valley. Of 386 varieties found throughout America, 80 are native to the Pacific Northwest, varying in size and habit from mat-forming rock huggers to woody shrubs of 3 feet or more; in color from reds to scarlet and blue to violet. 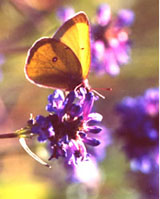 Gardeners enjoy the unique beauty of Penstemons along with their ease of care and attraction for butterflies and hummingbirds.

Despite most species' alpine ancestry, they take well to lowland gardens when given excellent drainage and full sun. Use them in a rock garden, among butterfly gardens, or in a dry sunny spot in your garden. They require sharp drainage, full sun and low fertility. Plant them in the right spot, and leave them alone!

Here at Bosky Dell Natives, we propagate many Penstemon species. Those listed below are grown here at our nursery; availability varies.