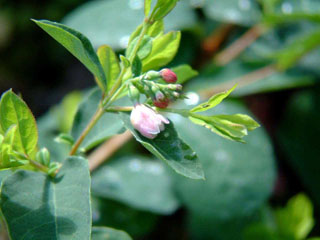 Lewis described snowberry in his journal entry of August 13, 1805, from a tributary of the Lemhi River in Idaho: "the road. . .brought us to a large creek. . . I saw near the creek some bushes of the white maple [mountain maple]. . . and a species of honeysuckle much in it's growth and leaf like the small honeysuckle of the Missouri [western snowberry] only rather larger and bears a globular berry as large as a garden pea and as white as wax.this berry is formed of a thin smooth pellicle which envellopes a soft white musilagenous substance in which there are several small brown seed irregularly scattered or intermixed without any sell or perceptible membranous covering." Again, while traveling along the Lolo Trail on September 20, 1805, "saw the huckleberry, honeysuckle, and alder . . . also a kind of honeysuckle which bears a white bury and rises about 4 feet high not common but to the western side of the rockey mountains."